The British Museum’s latest major exhibition, Nero: The Man Behind the Myth recently opened to great response in the press. The major reviews were gathered together by The Week, and they show just how fantastically well the exhibition has been received: the show has been described as a ‘wonderfully evocative exhibition’ which makes ‘history feel vividly alive’ (The Times), whereas the Telegraph also called it ‘evocative’ but when on to describe the overall experience as ‘wildly exciting’ & a ‘provocative, brilliant polemic’

DHA worked closely with Drinkall Dean and Lombaert Studio to create a theatrical setting for this showman of the Roman world, including the use light projections, gobo textures and animated light sequences, with all objects beautifully and carefully lit.

A perfect example of how lighting can add enormous value to a gallery project can be seen at our recent work on the V&A Museum’s series of three linked gallery spaces that form the Design 1900 – Now collection. The galleries have recently been refurbished to great effect & the process was recently featured in the BBC2/Blast series, Secrets of the Museum.

Project designer, David Robertson, worked with the V&A’s lead curators, Corinna Gardner & Johanna Agerman Ross to re-light and refresh the spaces, originally designed in the 1980s. The challenge was to retain all of the cases and setworks, which featured a lighting system so dated – relying mainly on halogen sources – that it could easily have featured as one of the gallery’s exhibits. An initial attempt had been made to replace some of the halogen with retrofit LED lamps, but the results were inconsistent: the lighting, from simple overhead lightboxes, was bland and in many cases had failed, leading to a patchy and dull appearance.

The first part of the refurbishment was to understand what the museum needed: a flexible system that could light large objects, down to tiny pieces, creating modelling on the three-dimensional pieces, but equally able to light large flat pieces, such as signage and wallpaper samples.

DHA proposed the existing egg-crate louvred light boxes were upgraded with a high-quality LED behind a diffusing acrylic for a fresher, more contemporary feel. The LED sources were chosen for their colour performance and quality; dimming was introduced so that light levels could be varied from bay to bay to suit the background level of illumination required. A series of mock-ups showed that an ambient light at 4000K worked extremely well with the daylight available in the galleries, and avoided the ‘yellowing’ appearance that a warmer LED source might have introduced.

By contrast, and to create the modelling on objects, a miniature track system was introduced at the front of the case using 3000K warm white sources, as concealed as possible while working within the constraints of the original case framing. This system can carry a number of re-configurable LED spotlights that can have their colour and beam adjusted to suit the objects, and is fully individually dimmable. This approach suits a series of displays where many of the objects can only be illuminated to 50 lux to protect their delicate materials. The spotlights also allow the museum to re-configure displays to suit their Rapid Response collection: displaying and rotating objects as they are acquired.

The final step was to commission the cases: DHA’s experience with dealing with a full range of objects means that we can balance the required light levels into a cohesive visual composition, making each object have its own weight and significance while maintaining the correct light levels. The results speak for themselves.

The cases are again fit for purpose in a museum of art and design: objects and graphics can be clearly seen in a good quality of light with the correct colour rendering; the system is fully adjustable to suit the changing displays, and the control is logical and simple to operate. This is a great example of how good lighting can aid in museum sustainability: old cases need not be discarded, they can be refreshed and made suitable for the demands of C21st display, while reducing energy costs and maintenance demands at the same time. 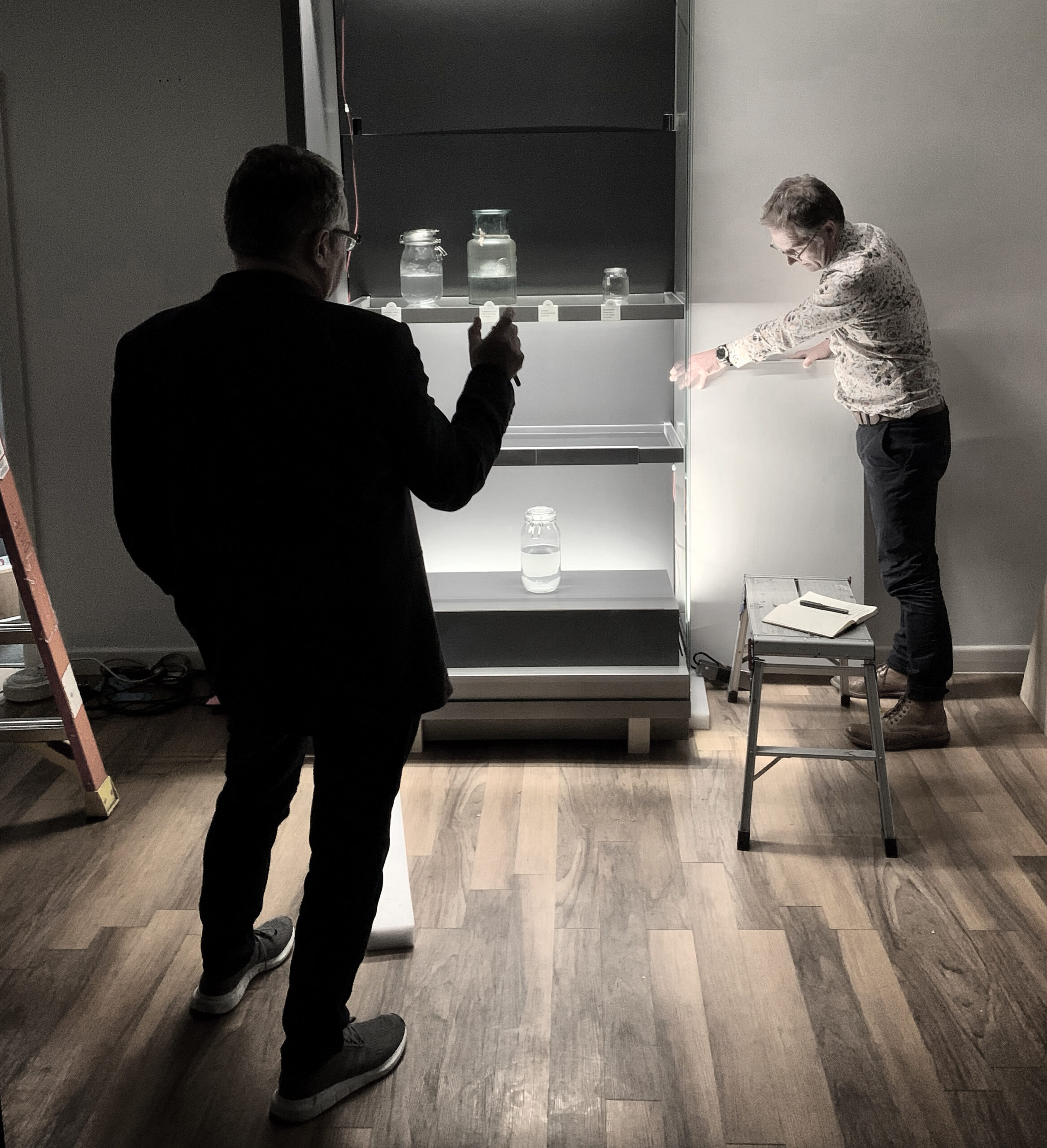 When creating bespoke lighting systems for display cases, then a physical mock-up – as intensive and time-consuming as it will be – is an absolutely necessity for the best results.

Jonathan Howard recently travelled – in a Covid-safe manner, naturally – with designers from Casson Mann to the factory of Click Netherfield in Livingston, just outside Edinburgh. The aim was to test and refine the lighting in some key display cases for a new museum, opening in London in 2022.

Not only will the cases be built mainly from glass, but the contents of each case will be a variety of samples and specimens, all displayed in liquid-filled glass jars: with so many reflective and refractive surfaces in use, it becomes easy to see why only a mock-up could cope with the many variables and methods in play: lighting all of the objects to give them a suitable weight and clarity when they need to be limited in light levels, while making sure that labels and graphics are very clearly illuminated is quite a feat of engineering and one that has been occupying us in the recent months.

Separation of light levels between graphics an objects has been developed using a combination of very narrow beam angle LED fixtures by Vexica, with a series of masking elements developed by Jonathan & Click’s designers, which has meant that we can achieve light levels of over 200 lux on a graphic that is merely millimetres from a shelf that is lit to a maximum of 50 lux; this separation will allow visitors to read small text easily, while not suffering with visual accommodation problems when they look past to the objects themselves, displayed at conservation light levels that will protect their organic content. As the source of the light is masked from view, we cut extraneous reflections and glare that could easily make the multiple glass and metal surfaces become their own light sources and a source of visual confusion.

The museum will not open until well into 2022, but this work needs to be carried out now to ensure that cases can be built in good time for transport and assembly on site, ready for the collection to be transferred to the finished gallery. 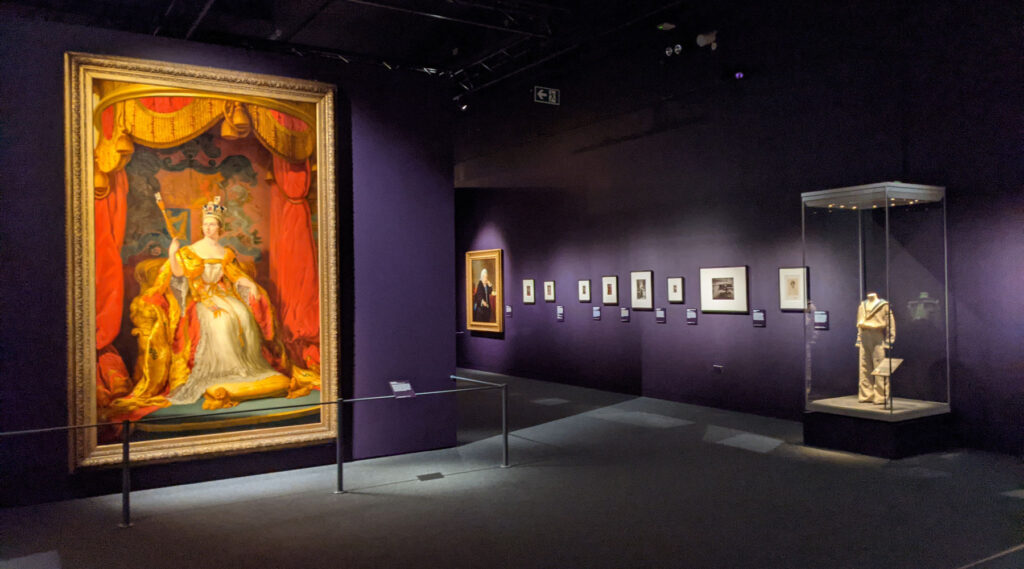 Our latest project: Royal British Portraits: Tudors to Windsors at the National Maritime Museum in Greenwich has opened to very positive reviews. The Evening Standard‘s reviewer gave the exhibition four stars and described it as an unsurpassed way of conveying what actually happened over half a millennium, which is quite a feat for a single exhibition. The space has been thoughtfully divided into spaces for each of the major royal dynasties that have shaped our history from the Tudors to our present royal family, the Windsors.

The Royal Central website described the experience as carefully curated & beautifully displayed, with lighting that is soft and unobtrusive: quite a complex task when were faced with monumental works such as the iconic portrait of Queen Victoria in full Empire pomp that occupied an entire wall, down to the tiniest of portrait miniatures, carried across Europe to contract royal marriages as a diplomatic tool as much as a love match.

Due to the sensitive nature of many of the works, including the most fragile of early photographic prints and miniatures painted on playing cards, our biggest challenge was to create a lighting environment that could give each piece an equal weight and clarity despite the enormous range of sizes, materials, colours and even framing in use throughout the exhibition: this included lighting a light box to assist in viewing contrast and coping with the most reflective of modern photographic prints that we have yet encountered.

Each section of the exhibition was given its own colour theme to give a visual key to the changes of dynasty, and as each colour responded to light in a different way, we had to carefully balance each section so that the visual appearance remained consistent while keeping the light levels to conservation-suitable levels; the full range of the museum’s lighting stock was pressed into service for the scheme and to protect some of the most delicate miniatures, a responsive lighting system was developed for two key display cases that respond to visitor presence, so that the miniatures are only lit when necessary. 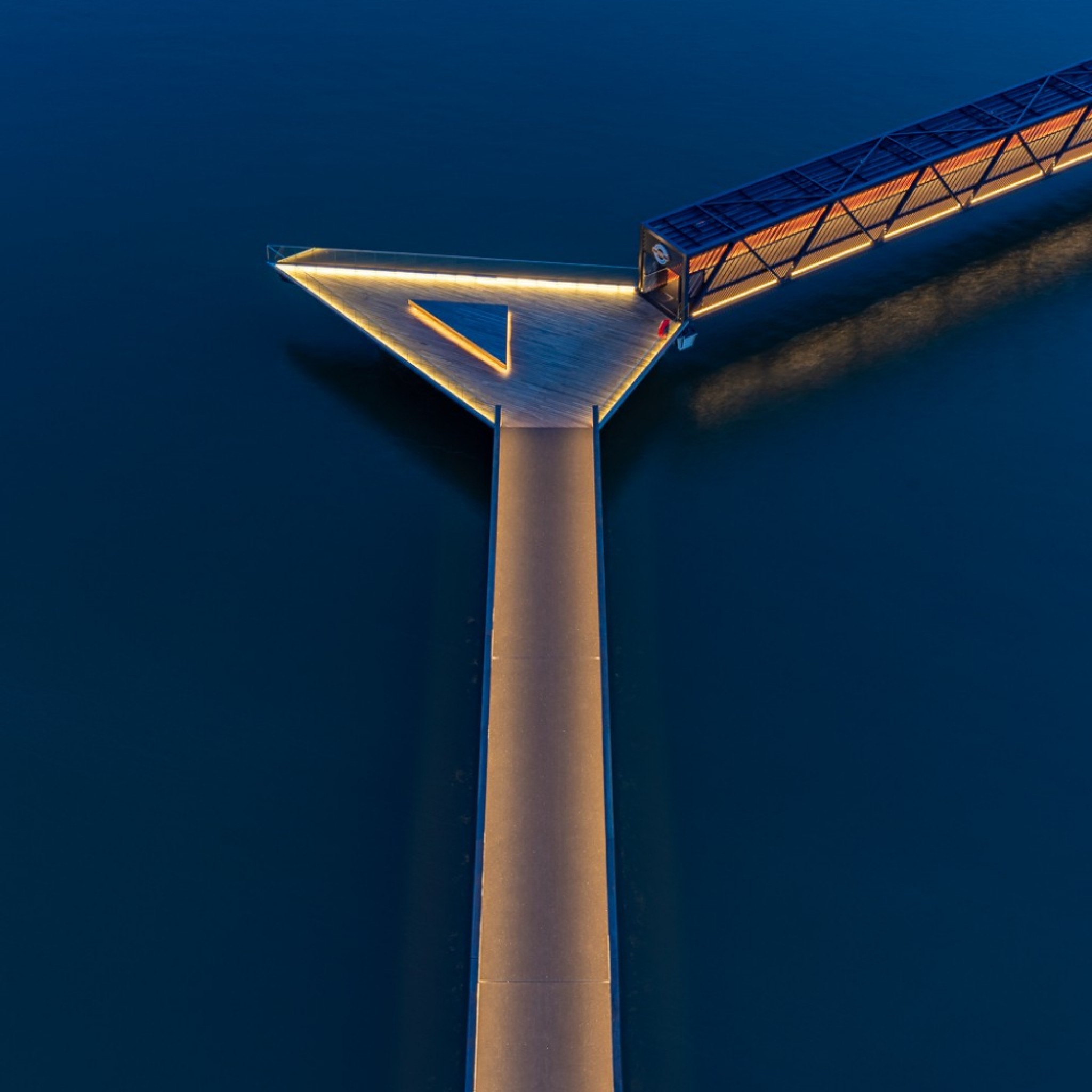 We were delighted that our scheme for NEX Architects-designed Royal Wharf Pier in London has won the Best Public Realm Lighting Project award at the 2020 Lighting Design Awards.

We managed to beat some remarkable projects in the UK and worldwide to win this, so this was a great accolade for the scheme designed by Des O’Donovan. We had already been shortlisted in the Darc Awards for this project earlier in the year.

The scheme had to respond to the location, the use of materials, other river users & of course users of the pier to create a single, dramatic scheme that pulled all of these elements & requirements together into a fully-integrated whole.

Thank you to our suppliers (LEDLinear, iGuzzini) & collaborators who helped make this happen, and to NEX for their beautiful architectural response to the river.

We have a great track record with working with the NEX team: our previous collaboration was the remarkable Vardo Restaurant in Duke of York’s Square, London: here our lighting was shortlisted in the 2020 Restaurant & Bar Design Awards.